Antharvedi is located at a distance of 130 Kms from Kakinada, 100 kms from Rajahmundry and 65 Kms from Amalapuram. In Kritayuga, Sage Sounaka and his colleagues gathered in Naimisaranya to conduct Satrayaga. In the their Leisure time, they used to learn about the distinguished and significant historical India Shrines from Suta, a quaranic narrator. One day, they asked him to tell about the greatness and significance of Antarvedi Shrine and of Lord Lakshmi Narasimha. Suta was pleased to tell the story which was once told by Lord Brahma to Sage Narada. 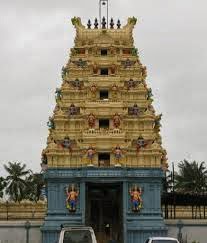 The temple is called as an island temple because of its confluence. This temple is among the rarities as the main Deity i.e. Lord Sri Lakshmi Narasimha Swamy(one of the ten incarnations of Lord Vishnu) who faces towards West instead of East (usual direction of other temples in India) constructed between the 15th and 16th centuries. This is 32 kshetra of 108 Narashima kshetrams. It is a temple of 5 storeyed Vimana Gopuram. As one enters the temple one can Garuda on one side and Bhaktha Anjaneya on the other side of temple entrance. While approaching “Garbha Gudi” (Sanctum Sanctorum) one can see an adorable “Vatapatra Sayi” (Lord Krishna on a palm leaf) on its roof. The idol is made from a single stone. In the Garbha Gudi, one can have a darshan of the magnificient Lord Sri Lakshmi Narasimha Swamy with his Consort Goddess Lakshmi Devi on his lap. 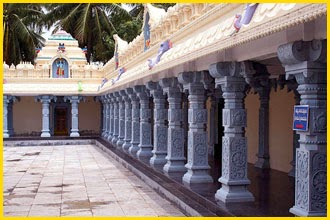 After the darshan, one has to go around the sanctum, as there are different deities. On the east side of the prakaram(wall), is Goddess Rajyalakshmi and Lord Venkateshwara, to the north side is Bhoodevi and Ranganadha Swamy, to the west side of the prakaram is Santhana Gopala Swamy and Keshava Swamy, and finally to the south side of the prakaram is the Acharyas and Alwars sannidhi(small temples) and Chaturbhuja (four-armed) Anjaneya. Apart from the presiding Deity, Lord Narasimha Swamy, there are also Deities of Brahma, Vishnu, and Shiva. A temple of Neelakanteshwara (Lord Shiva) is also present which is located at the other side, almost nearer to the bank of Godavari, also called, Vasishta Godavari is a must see. This deity was installed by Lord Sri Rama and is said to be worshipped by Brahma himself.

There are many other temples over here too like 'Nilakanteswara', 'Sri Rama, and Anjaneya' etc. This place has glorious past, connected with several 'August Munies' such as 'Brahma' among celestials, Sri Rama among the incarnated and Vasishta among Maharshis.

There are five important spots of this Holy shrine namely.
1. The Sea
2. The Sagar Sangam
3. The Vasishta River
4. The Raktakulya River
5. The Chakrateertham.

It is said that there will be no re-birth on taking a dip at these places and on offering charities there. Performing ceremonial formalities to the ancestors at this holy-shrine is equivalent to these done at Gaya and Ganges. One on nearly visiting this place, will be blessed from with multitudes. People from distant place, like Varanasi, also visit this place, especially to participate in Lord Narasimha's Chariot procession in the month of Phalguna (January) and dolepournami celebration in the month of Phalguna (March). Then the lord is worshipped with panchamrita abhishekam. This shrine blesses the pilgrims with Mukti, and so it is also called the Mukti Kshetra. Antarvedi is also named after the Lord as 'Narasimhakshetra'.
Antarvedi has the sea in the East and the South the Godavari in the West and the Raktakulya river the North. It covers a distance of about four square miles. It is in the Razole Tq. of the East Godavari District. Special conveyance facilities are arranged for the convenience of the pilgrims coming from distant place to attend the annual Mela there. At the time of Mela, Antarvedi seems to be kaliyuga Vaikuntha. The Mela run for about nine days. It is One hundred and eight shrines of Lord Narasimha.
Antarvedi is said to be the second Varanasi by the grace of the Lord. The residents of the shrine have a fear of the floods or of the drought. A more wish to visit this holy place, will bless the devotees with desired results. Thus the great glory of the shrine is boundless.

The temple constructed between the 15th and 16th centuries. There is also a temple of Lord Siva that is older than Narasimha Swamy temple. The temple's idol of Lord Siva was installed by Lord Sri Rama.
In the 18th century, Peddapuram Rajas were the trustees and were responsible for developing the temple. Mogaltur Raja's are the traditional trustees of Antarvedi Temple, with this duty beginning in the 19th century. Late Shri Raja Kalidindi Kumar Ramachandra Raja Bahadur also contributed a lot to the temple. He was the former chairman of temple development and the hierarchical trustee of temple. Later, the present temple was constructed by Kopanathi Adi Narayana, a merchant who was also an overseas businessman.
The lord and temple was gifted along with many priceless jewels from past kings, nobles and even the East India Company. These jewels have been stored in a vault at the treasury department for the last 50 – 60 years. the age old jewellery of the god is being brought to Antarvedi and the idols of the Lord are being decorated during the Kalyanotsavam. 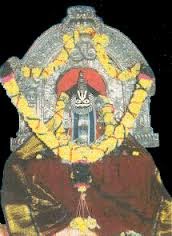 Also known as "Dakshina Kashi (Kashi of the South), Antarvedi, is an important pilgrim centre in the East Godavari district of Andhra Pradesh state in India, situated at the interior part at East coast. Lord Brahma, in order to get freed from the sins he had committed against Lord Sankara, had performed Rudrayaga and installed Lord Neela kantheswara there. As that place was made a stage or "Vedik" to perform the Yagam, it was named as "ANTARVEDI" It is a small village in Sakhinetipalle Mandal which is located close to Narsapur near the Bay of Bengal Coast and Vashishtha River. This river is said to have been brought by Maharishi Vashishtha, one of the Sapthrishis(seven great sages) of Hindu Mythology. It draws people from far off places throughout the year because of its unique rarity: the confluence or mergence of Bay of Bengal and Vashishtha River, a tributary of River Godavari. The place of confluence where the mighty ocean Bay of Bengal meets the Vashishtha River is called the "Sapta Sagara Sangam Pradesam" and also as "Anna Chelli Gattu". One can even taste the water here as it is not salty but quite sweet!!!! Unbelievable but true!!! This place is the last and the most important of the seven sacred bathing places. It is popularly believed that the Tretha Yugam episode of Ksheera Sagara Mathanam took place here.

Sometime later once a fisherman was fishing his net in the Raktakulya river. He found a marble Saligrama instead of finshed. He carelessly threw it back into the water and again spread his net. He found the same stone as many times as he was fishing at different spots of the river he found the same stone coming again to him. Being afraid of this incident, he angrily dashed it to the ground then there was a strange continuous blood flow from the stone with surprise and fear, he prayed to the Lord and fell senseless there. The Lord appered to him in dream and said that he only appered in the waters of Raktakulya river as Kurmavatara in marble and asked him to take him to the temple and install him at the Abode of Lord Narasimha telling the priests as his words to celebrate the “Nityabhisheka” formalities to him along with Lord Narasimha there. The fisher did so this stony from Kurma incarnation of the Lord can be seen available even today at Antarvedi Devasthanam.

Every year on the day before Bhishma Ekadashi i.e. Dashami, which is observed Magha Shukla Ekadashi (Eleventh Day) in Magha Masam (February) Lord Sri Sri Lakshmi Narasimha Swamy Kalyanotsavam (divine wedding of Lord Sri Sri Lakshmi Narasimha Swamy and Goddess Lakshmi Devi) is celebrated with much enthusiasm. On the Bhishma Ekadashi, the Rath Yatra is celebrated. Devotees in huge number attend to watch the Celestial Wedding and take holy dip at the sangamam (Saptha Sagara Sangamam).During the month of November, throngs of devotees come to the temple premises to witness the Deity of Narasimha Swamy without any of the ornaments, garb, or chandanam (sandal paste) that normally adorn the Lord’s Form. In the month of Phalguna (January), the Lord’s chariot procession is held. Dole pournami celebrations are also held, when the Lord is worshipped with panchamrita abhishekam. Sri Venkateswara Swamy kalyanam, (Jyeshta Sudha Ekadasi)., Sri Narasimha Jayanthi (Vysakha Sudha Chaturdasi) are the other festivals celebrated here.

For tourists as well as pilgrims one can hire ferries(boats) which are available to visit the small island that is on the other side of the river and also to the point where the river and the ocean actually meet. On off seasons, one avail the ferry service for a nominal fee whereas in the peak seasons the fee rises alarmingly. The cost varies depends on the number of people. If limited a number of people are willing to visit the island, a nominal amount of INR 350 will be charged. If a more number of people are available, INR 50 will be charged for each person.

The area's religious fair is held on Bheeshma Ekadasi, which is generally in January or February. The annual Kalyanotsavam will begin on the day of Ratha Saptami and concludes on the day of Pournami with Chakra Snanam. It attracts lakhs of people to this usually sleepy village located at the confluence of River Godavari with Bay of Bengal. Lord Narasimha Swamy's Kalyanam is performed on Dasami and Rath yatra was performed on 'Ekadasi day'. The royal Polamuru Sree Raja Kalidindi family descendants have rights to submit talmbarlu biyyam and other marriage items. The royal Mogaltur Sree raja Kalidindi family male descendants are the first people to pull the rope of rath, and then it is pulled by the devotees.
Hundreds of thousands of devotees attend this festival starting on Dasami and continuing until the full moon day. Thousands of devotees thronged the Lakshmi Narasimha Swami temple on Thursday night to witness the celestial wedding of the Lord with goddess Lakshmi. The rituals began with spata nadi jalabhishekam (abhishekam to Lord Narasimha Swami and goddess Lakshmi with water fetched from seven rivers). All rituals commenced as ordained in Vaikhanasa Agama Sastra. Maha shanthi homam was performed from 8 a.m. to 10 a.m. Mudrikalankarana is one of the main rituals before the kalyanam. Bellamkonda and Vundavalli families sponsored the ritual.
In keeping with tradition, archakas from Peruru participate in special puja to Koormanatha Swami, whose idol was caught in the nets of fishermen in Raktatulya River during the 14th century.

The nearest railway station are at Rajahmundry and Narsapur.

Antarvedi can be reached by boat from Narsapur, which is 112-km south of Rajahmundry. There are buses from Razole that take pilgrims to this sacred place.
Posted by SRINIVAS at 23:47