Penchila Kona is very pleasant and a hilly place where Lord Narasimha manifested himself here as a huge of rock in yoga mudra and hence it acquired the name of ‘Penusila’ (huge rock) and in course of time became famous as ‘Penchalakona’ and this temple is known with name Sri Penusila Narasimha Swamy Temple.

This is very powerful and ancient pilgrimage place. It is believed that after slaying the demon Hiranya Kasipa, Lord Narsimha bathed in Penchalakona and withdrew that “Avatara”(incarnation) of Narasimha, shedding his anger and ferocity. The Lord here goes by the name of Somasila Narasimhaswamy and has become one of the Nava Narasimhas (nine manifestations).

Devotees come from various places to visit Narasimaha swamy (Aadhi Laxmi matha temple is beside this temple), It believes that all wishes of devotes get fulfilled If they visit this place with faith and unconditional love.

The Lord here goes by the name of Somasila Narasimhaswamy and has become one of the  Nava Narasimhas (nine manifestations). People believe that because the sage Kanva resided in this area in the past, the river flowing here acquired the name Kanva Nadi and that with efflux of time it became Kandaleru. It is also learnt that the temple was renovated in the 10th century.

Lord Vishnu took Narasimha avatram to kill HIRANYAKASIPA. After killing Hiranyakasipa, Lord was moving in this forest with Ugra Rupa. In order to calm down  the anger of Narasimha Swamy, Goddess Sridevi came in a disguise of Chenchu Lakshmi (name of a tribe, that lives in that area), daughter of the king for that tribe. Lord married Chenchu Lakshmi and became Son – in –law of the tribes. So Chenchu tribes are given importance in this temple. Lord looks as if he hugged (penavasukovatam) Chechu Lakshmi, so he is called as Penusila Lakshmi Narasimha Swamy. As time passed by it is called as Penchula Narasimha. The deity inside the temple is Swayanbhu(self manifested). 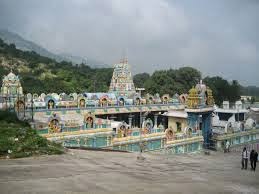 The Temple of Sri Penusila Lakshmi Narasimaha Swamy is situated at the foot of Hill of the picturesque Penchalakona Valley. The river flows through Rapur Taluk and empties itself in the Bay of Bengal, Near Krishnapatnam. Everyday gollabayadu used to go to the Kona to graze his cattle regularly from Gonupalli. One day boyadu saw an old man who told him that Penusila Lakshmi Narasimah Swamy established Himself in Kona. He asked boyadu to straight to the village head an inform of this miracle. He turned back to see the old man. To his astonishment the old man transformed himself into a rock. 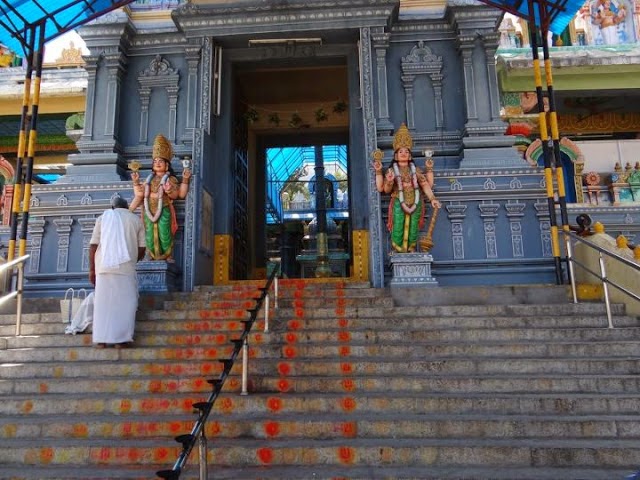 The only construction that appears to possess been at tempted regarding 670 years past was the Garbhalayam (SANCTUM SANCTORUM) that had step by step been left neglected. And nowadays it’s in an exceedingly state of virtual collapse. The image of the lord may be a self manifested one. (SWAYAMBHU) 2 stones put down twisted to from a lion’s Head at the highest. Thus the Lord is termed “PENUSILA Lakshmi NARASIMAHA SWAMY” I Telugu “PENU” means that twist and “SILA” is stone. when killing Hiranya Kasipa as NARASIMAHA, Lord Vishnu married Chenchu Lakshmi in BHAIRAVAKONA, an area at a brief distance from Pensusilakona and killed the RAKSHASAS who were torturing “RISHIS” . The Lord, Vishnu won’t to visit the lake each Saturday and as a proof a Silver Umbrella rose from the Lake. The divinity is extremely powerful area unit celebrated because the savior of chaste girls.

Everyday  gollabayadu wont to move to the Kona to graze his cows often from Gonupalli. in the future boyadu saw AN old man who told him that Penusila Lakshmi Narasimah Swamy established Himself in Kona. He asked boyadu to straight to the village head AN inform of this miracle. He turned back to check the previous man. To his feeling the old man remodeled himself into a rock. 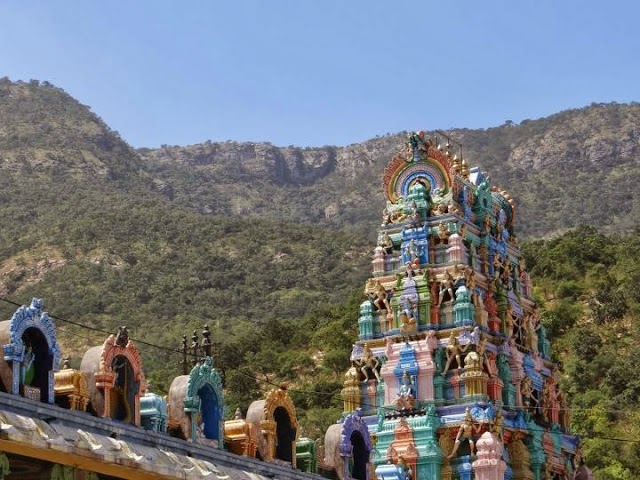 Temple is constructed on or in front of a hill, the positive energy of the hill reinforces the positive energy of the Gods within the temple. We are welcomed into the temple by a tall tower or gopuram. The height of the gopuram symbolizes the generosity of the local rulers who contributed money for the 800 year old temple's construction. Statues of lions sit guard over the entrance - a lion in Hindu culture is brave, loyal, and strong. Guardians called dwarapalikas or those who dwell in the door welcome us into the temple.

The annual festival of the temple, during the month of April and May, is a major event at Penchalakona. Devotees from near and far distances congregate for Narasimhaswamy Jayanthi with great devotion. The river KANDLERU as it is now called, originates from the water falls of the mountain ranges on the West and the South, had another name KANVAYERU. The river flows through Rapur and empties itself in the Bay of Bengal, Near [Krishnapatnam]. 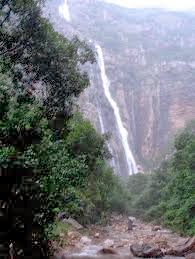 Water fallsThe water fall coming from the hill where the Lord lies, flows down in the northward direction. In ancient days a devote, Maharishi (Saint) by name ‘Kanva’ dwelled by this river and used this for his basic needs. This is what people here believe. So, this lake is named after him as ‘Kanvayeru’. As the days passed by the name was changed to ‘Kandaleru’. Government in 1982 constructed a dam In a low level region nearby this lake. They named this dam as ‘Kandaleru dam’. Because of this dam the agriculture of many surrounding lands was fruitful and this dam gave Livelihood to many natives.
Posted by SRINIVAS at 23:49