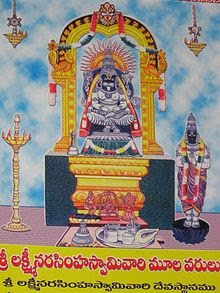 Narasimha or Nrusimha also spelled as Narasingh and Narasingha, whose name literally translates from Sanskrit as "Man-lion", is an avatar of Vishnu described in the Puranas, Upanishads and other ancient religious texts of Hinduism.and one of Hinduism's most popular deities, as evidenced in early epics, iconography, and temple and festival worship for over a millennium.

He is often visualized as half-man/half-lion, having a human-like torso and lower body, with a lion-like face and claws.This image is widely worshiped in deity form by a significant number of Vaishnava groups. He is known primarily as the 'Great Protector' who specifically defends and protects his devotees in times of need.

Lord lakshmi Narasimha swamy in Kadiri temple is swayambhu rising from the roots of Khadri tree. He seems here as Ashta Bahu Narasimha (having eight hands) tearing Hiranyakasipu. We are able to see Prahlada standing beside him with bifold hands.

Several scenes from 'Ramayana' are painted on the ceiling of the 'Rangamantapa' and several frescos on that of the Lakshmi mantapa depicting scenes from the 'Bhagavata'. Unfortunately the murals have lost their freshness and are fading. Many inscriptions on the temple mostly mention the gifts given by kings to the temple.

The legendary significance of this sacred shrine dates back to Trethayuga, and according to local version, the presiding deity - Narasimhaswami in His terrific aspect - 'Vugrarupa' chose to settle down here after killing Hiranyakasipu.

It is said that devotees who offer prayers here get relieved of their sorrows, sufferings and sins. There are several sacred thirthas connected to the temple that are a worth visiting.

The town got its name from Khadri, in Sanskrit, meaning Indian mulberry. It is believed that Lord Shri Khadri Lakshmi Narasimha Swamy came out of this tree. The main deity in Kadiri Laksmi Narasimha Swamy temple is Ashta Bahu Shri Narasimha who has eight hands clawing open the body of Hiranyakashipu.  This was one of the ten avatars or reincarnations of Lord Vishnu. The specialty of this temple is that after the daily obeisance known as Abhishekam is performed; the Lord Narasimha is seen to be sweating despite being wiped clean by the temple priests.

Narasimha means ‘Man Lion’ as that was the form taken by Lord Vishnu to kill Hiranyakashipu who could not be killed otherwise. This incarnation has been mentioned in the Puranas, Upanishads and the other religious text books of the Hindus. It is merely a mention on how truth can overcome evil despite the difficulties.  He is envisioned as a half man with the torso and lower body and the face and hands, that of a lion.

Thousands of Hindu devotees throng this temple during festivals which is otherwise known as the Laksminarayana Temple. The legendary aspect of this temple dates back to Thretha yuga, one of the four Yugas which are measured by the number of years. The four Yugas are:

The scriptures say that Lord Vishnu, in one of his incarnations as Lord Narasimha , in his rage descended down on to earth as Ugrarupa to kill Hiranyakashipu, who wanted to avenge the death of his brother Hiranyaksha . Hiranyaksha was killed by one reincarnation of Lord Vishnu as Varaha. He took the people to task and tortured the sages and the common people for praying to Lord Vishnu. The sages appeared before Lord Vishnu to end this terror. In the meanwhile Hiranyakashipu got a boon from Lord Brahma after praying fervently for a favour. The boon was that it would be impossible for any human to kill him. Ultimately, Lord Vishnu had to reincarnate as Narasimha to kill Hiranyakashipu, as he was about to kill his own son for showing allegiance to Lord Vishnu.

It is said that Lord Narasimha emerged from the Khadri tree to act his part in killing Hiranyakashipu at this place. The temple was built by one Ranganayudu, a Palegar of Pathariapattanam.

The Rangamantapam has been ornately carved with scenes from the Ramayana and further down, the Lakshmi mantapa has depictions of the Mahabharatha. There are inscriptions on what the rulers have given to the temple. The carvings and scriptures have started fading due to the vagaries of climate and weather. 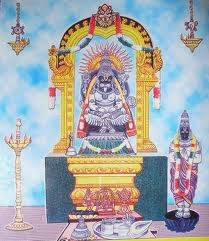 The image of Sri Narasimha swamy is in human form with Lion’s Head, covered with silver armour decorated with silver shoulder blades, moustaches and eyes and is in the posture of bearing the stomach of Hiranyakasipu.    The procession image of the deity is in the form of Vishnu made of metal with Bhudevi and Sridevi on either side.Actually the kings from the Paschima Chalakya Dynasty housed Durgadevi under an amazing stone curved pillar mandapam and Lakshmi Devi Vigraham was also housed in the temple in 1953. As per the orders of the Lord Narasimha Swamy varu the Lord  Idol was housed and mandapams equal to Ammavari temple are constructed in excellent curving on stones to southern side to ammavari Temple was constructed by  the Vijaya Nagara Rulers.

The temple is enclosed in a 500 ft square high walled compound with 4 entrances having a gopuram at each entrance constructed.  The stone sculpture  in Yagnamantapam conspicuously abound in lions.  The temple is facing east and the Kalyanamandapam in  its front to the left Yagasala a  pakasala, astana mandapam  to the north where the utsava vigraha of the lord is made to sit during the festival are the important structures within the compound.  A 80 ft square pushkarini is in the north east corner within the temple compound.  To the south of the temple there is the shrine of Chinnamma with her image in stone. 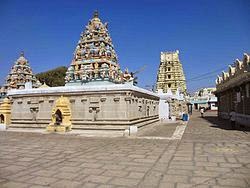 The inscriptions in the temple relate mostly to the Vijayanagar period and are all in Telugu, except two.  One of them on the south wall of the arthamantapuram, states that the temple was built by a Nayaka during the reign of Bukka I saka 1274 (1332 A.D.).  Another inscription near it, dated the next year records the gift of a jewel to the idol by Gopanna  an officer under Kempanna Odeyar, the restorer of the Srirangam temple and the contemporary of Vedanta Desikar.  A stone slab is said to contain an inscription regarding this custom which still prevails.   Yet another inscription shown that in the Salivahana Saka 1451, 1529 A.D. the palegar  of Tadipatri constructed the Vasanta mandapam adjacent to the prakaram (now called the thousand pillar mandapam in which feeding is conducted  along with breath taking Kotai Mandapam.  Further proof of antiquity of the temple, its great ness and importance and the sancity attached to it, are vividly described in the Khadri Sthalapuranam in Brahmanda Puranam.    The temple car which is considered to be the biggest in Weight in South India contain numerous indecent carvings and the Car streets contain several small mantapams on four tall pillars in which the idol is set down and worshipped during festivals.

The famous East, South, North, West Rajagopurams of this temple were constructed by Vijayanagara Emperors, Chinnamma a devotee, not known, Kokanti Poligar  respectively.  The gate way at West Rajagopuram, leads to a tank which supplies water to the temple from which principal metal idols of the temple were recovered by the Sage Brigu. The popular king of Vijaya Nagara Sri Krishna Devaraya and Maharastra King Shivaji Maharaj visited this famous temple and  constructed sub temples and Mahishasuramardini Temple respectively. 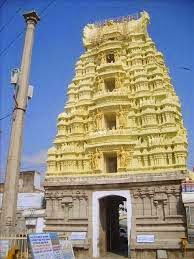 The sacred pond lying behind the mandir going by the name of Brighu maharshi thirtha is said to have been dug by him. 'Me locals extol the glory of the tank and its water, concluding that the Utsava vigrahas were found buried and were taken out during the digging operations. There is one more pond in the vicinity called Palabavi, on account of the milky white water it is containing. 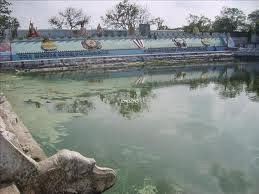 Festivals:-
An event carried out every year is the Rathothsavam (Car Festival), on this holy day, a huge Rath (Chariot) with the Lord Lakshmi Narasimha's idol on it is pulled by hundreds of devotees are watched by lakhs of people. Thousands of people arrive from almost all surrounding districts and from Karnataka to watch the event.
Posted by SRINIVAS at 05:03